One of the unique things about SPIN is that it contains valuable information about substance volumes distributed into technical functions and industrial uses of the chemical preparations that the substances are used in. Though this information only covers the Nordic countries, it probably still provides a good general view of the use of chemical substances in industrialised countries. A general view that combined with toxicity data from other sources can be used for setting the order of priority for political decisions about which substances to further investigate or regulate.

An example that shows how SPIN could be used in a priority discussion could be an investigation of which substances that, according to SPIN, were used in 1.000.000 tons or more in at least one of the Nordic countries in the year 2000. In the first step this is done by searching in the “Tonnes” field of the “Total use” tab, which gives you 15 hits displayed on a list. 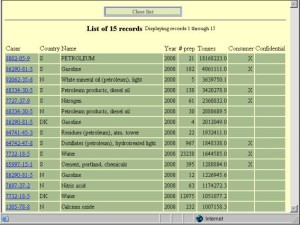 The “X” in the “Consumer” column indicates that some of the 15 high volume substances are not only found in preparations for industrial use, but are also found in preparations used by consumers. This is interesting, because consumers in many cases will risk a larger extend of exposure than an industrial worker. Industrial workers in the Nordic countries are typically very well educated and aware of the potential risks in relation to their jobs. In contrast to the typical consumer, they will often have access to the right equipment for protection, and they will know how to use it. From a political point of view the subset of data that will result from a re-run of the original search were only the substances found in consumer preparations are selected, will therefore be more interesting than the original set of data.

If you look at the new list below, it turns out that the consumer subset contains only 7 out of the original 15 substances. Apparently the 7 high volume “consumer substances” were only used by Swedish consumers, but this is probably not the whole truth. It is far more likely, that the explanation lies in the fact, that Sweden was the only country to report consumer data in the year 2000. Anyway, the subset probably does give us a good general view of which substances that are most frequently used by the consumers in an industrialised country.

When you look at the 7 high volume “consumer substances” it is not surprising that water and cement are among them. Also high volumes of the fuels (petroleum, gasoline, diesel oil and petroleum distillates) would be expected, but what are the high volumes of nitrogen used for? This can be investigated by clicking the CAS-No. and shifting to the “Use Category UC62” tab. If you choose the year 2000 (see section “1.6.4 On-line help – Use by category”), you will see that the use of nitrogen is connected to the use of fuels. 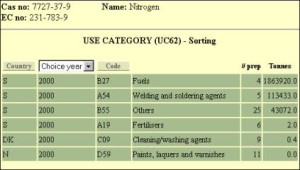 If we change our view back to our previous concern about consumer safety, the list of the 7 substances should not concern us. Maybe more interesting substances would occur if we changed our original high volume criteria to >100.000 or >10.000 tons instead of the original >1.000.000 tons. Our example therefore shows some of the true difficulties in the process of deciding the right initial framework of a risk assesment suitable for the political decision making process.

Yes, to a certain extend it is!

In order to find all the colouring agents in SPIN that are on the E.C. List of Dange-rous Substances we make the assumption that all colouring agents have aColour Index number (see section “1.6.6 On-line help – Technical”). Then we combine this with the fact that substances from the E.C. List of Dangerous Substances have a certain Index-No. The relevant substances can then be found by searching in the tab called “Technical” with the criterias “Index-No.” “contains” “-” and “Colour Index” “contains” “*”. This gives you 43 hits. You can now run the report “List Substances” (see section “1.7.3 Reports – using the current found set”) to get an overview of the found substances.

To check whether the found substances really are used as colouring agents, you can switch back to the “Technical” tab and repeat the original search, now with the criteria added that “Code text” “contains” “PI” under “Substance Category” (see section “1.6.6 On-line help – Technical”). This will give you the subset of the original 43 substances that by the Danish Product Register are assumed to be either unspecified pigments (PIG), organic pigments (PIO) or inorganic pigments (PIU). 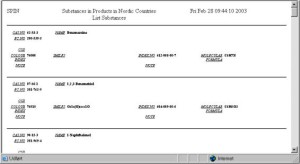